Because of the many airframe identification schemes across, and within, borders, each airframe that flew for Israel can be identified a number of ways. Israeli Spitfires, to name one type, can have the following foreign IDs: construction number (17/1342); manufacturer's serial number (TE521); RAF radio code (RG-W); or Czechoslovakian radio code (A-708). Even within Israel, each aircraft had multiple identifications. The radio code, painted in huge numbers on the side of the fuselage, at least in Israeli service, stands out most obviously - visually in photographs and artists' conceptions as well as in pilot logs and operational summaries.

Originally, the early Israeli air service marked its planes with a confusing array of serial numbers. The fighter planes of 101 received numbers beginning with the Hebrew letter dalet which, although it resembles a "T" in shape, is correctly rendered as "D". One of the S-199s bore D-108 on its fuselage, for example: 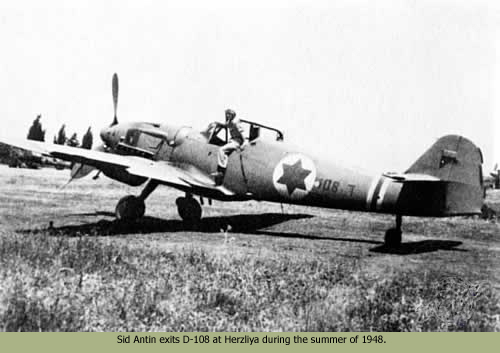 In November 1948, the Chel HaAvir established a standard numbering system that established unique serial numbers for all aircraft, grouped by type. Importantly for 101 Squadron, Spitfires would have serial numbers of the form 20XX, S-199s would be 19XX, and P-51s would carry 23XX. These numbers would replace the "dalet" serial numbers, but bore no relationship to the large radio numbers already painted on the planes. As a result, most pilots continued using a mishmash of schemes to refer to the aircraft. The Spitfire known as White 14 for its radio code originally bore the D-133 code, then the standardized code of 2004. Denny Wilson's December log book provides a good example, referring to Spitfire D-133 as late as Dec. 22, 1048 and calling the same plane "14" on his next flight, Dec. 29.

In the following pages, I've tried to match up all Israeli serial numbers. Each aircraft will eventually have a description of its own with as much or as little of its operational history and any distinguishing marks as I can glean.

SeaBee (for those weekend shopping trips to Tel Aviv)

Flying the Types: a Comparison

Gordon Levett compares the three combat aircraft flown by the 101:

Giddy Lichtman, at least, preferred the Mustang, however (Lichtman, pers. comm.). Aaron Finkel told me that he performed a 360-degree roll in the S-199 once - and it scared him so much, he vowed never to do it again.

During his air combat career, George Lichter spent extensive time in the P-47, the P-51D, the S-199, and the Spitfire LF9. He felt the S-199 flew like crap, saying "You really had to fly it all the time." He loved the Thunderbolt's power and armor and preferred it over the P-51 for combat duty. While he felt the P-51 was perhaps more maneuverable, it had an Achilles heel - its inline engine, which if hit would conk out quickly. The P-51's Merlin engine would give you 30 minutes at the absolute most after being hit. The P-47's radial could take enormous damage and still get you home.

Like many other pilots, Lichter loved flying the Spitfire most of all. "It was an absolute dream. The Thunderbolt was like a truck, and the Spitfire was like a Porsche."

Jack Cohen, too, enjoyed the Spitfire.

Well as far as the Spitfire was concerned, she was just the perfect aeroplane to fly. She had no vices - you did something wrong she'd turn around and say, you know, "don't do it again." Not like some of these American planes. I mean, you know they'd turn round and bite you the second you did something wrong. But the Spit really didn't have any faults - it was like flying a Tiger Moth. Very easy to fly. (Hyde 2000)

Cohen recalls that the Spitfire guns were harmonized to converge at 300 or 400 yards. He also had kind words for the Mustang:

She was fast. If anything slightly faster. But I think the Spit had the edge on her as far as manoeuvrability. Of course, the P-51 had the range. So that's why they could do the long trips even with the bomber boys. She was a very nice plane to fly, but that was only after they put a Merlin engine in it. (Hyde 2000)